We are spiritual and moral beings full of fantasies, dreams, agonies, ecstasies. A unique moment in history is each one of us, because DNA says there is not two of us alike. Now what are we going to do to satisfy our uniqueness and demonstrate our uniqueness? –Vartan Gregorian

Stanford, CA—On April 15, the Carnegie community unexpectedly lost one of its longest serving members—Vartan Gregorian, the twelfth president of Carnegie Corporation of New York. A giant of a man in intellect and impact, Vartan came to the U.S. as an Armenian to study at Stanford, and his love affair with education and the American experience never ended. A scholar of the humanities, he served as the president of the New York Public Library and Brown University before joining Carnegie in 1997. 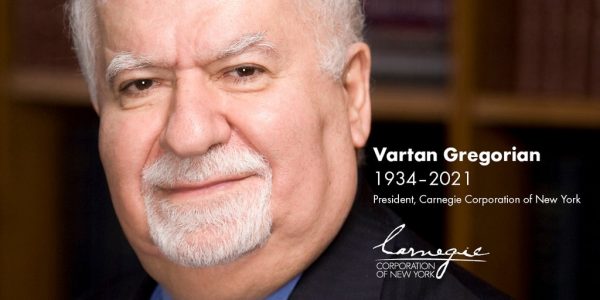 In 1998, Vartan was awarded the National Humanities Medal, and in 2004 he received the Presidential Medal of Freedom, the nation’s highest civilian honor. Driven by an insatiable curiosity, his appetite to make the world a better one was extraordinary. His influence will be long felt.

In 2019, Vartan spoke about the ease of access we all have to information. He said “information is not knowledge, you have to adsorb knowledge, see its consequences, and build on it.” We will keep Vartan’s sentiments in mind as we join with colleagues at the Carnegie Corporation in celebrating and honoring his remarkable life and enduring legacy.