The Connecticut RISE Network began in 2015 with a network of public school teachers, counselors, and administrators across five schools in four districts who shared the urgent belief that more could be done to improve their students’ college, career, and life outcomes. In 2019, the network expanded to nine school districts across the state, serving more than 14,000 students in 10 high schools. Its theory of change is embedded in its name—all students can succeed by leveraging new resources, data-driven innovations, improved systems, and educator empowerment.

The Connecticut RISE Network is being spotlighted for its work in generating demonstrable improvement of 9th grade on-track achievement and four-year graduation rates for students of color and students from low-income families through the use of networked improvement methods.

National research shows that 9th-grade on-track student achievement (i.e., earning enough credits to be promoted on time to sophomore year) is the single best predictor of whether a student will graduate from high school within four years—more so than test scores, family income, or race/ethnicity. The RISE Network partnered with five high schools in four of the state’s largest districts—East Hartford, Hartford, Meriden, and New Haven—that served 6,000 students, including 82% Black or Latinx students. This cohort demonstrated a 20-percentage point increase of on-track rates from 64% in 2015 to 84% in 2020, and the average graduation rate increased from 78% in 2016 to 87% in 2019 while statewide graduation rates remained constant. 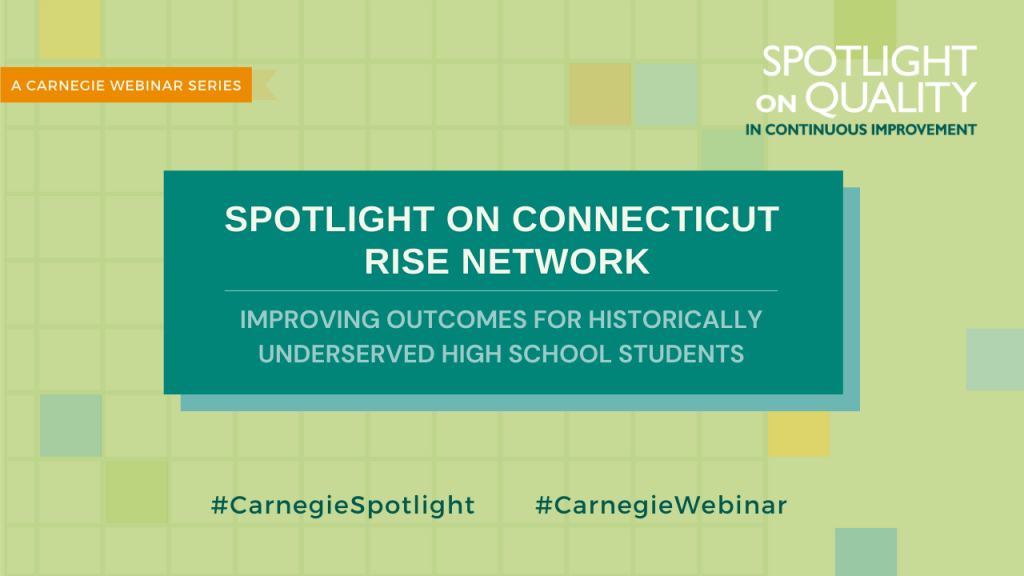 In this webinar, leaders of the CT RISE Network and practitioners on the ground discuss the strategies and practices that led to a rise in graduation rates from 78% in 2016 to 87% in 2019.
Download presentation slides (PDF)

Read the full profile of the Connecticut RISE Network for more details about the work.

Spotlight at the Summit

Connecticut RISE Network will present their work at a featured session at the 2021 Summit on Improvement in Education.