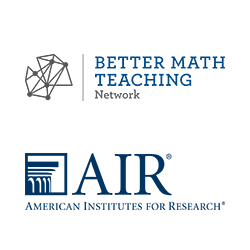 The Better Math Teaching Network is organized by American Institutes for Research (AIR) with funding from the Nellie Mae Education Foundation and consists of teachers from mostly rural and urban high schools in New England. Of the 41 network teachers, 40 percent work in urban schools, 35 percent work in rural or town schools, and 25 percent work in suburban schools. Most students served by Network teachers qualify for free or reduced-price lunch. The Network seeks to increase the number of students who have a profound understanding of algebra by translating research on student-centered instruction to practice.

Launched as a pilot in 2015, AIR’s Better Math Teaching Network has established a fully functioning networked improvement community, which is making progress toward meeting this aim. On a survey administered at the end of the 2016-17 school year, a large majority of Network students, above 75 percent at most school sites, reported making connections, providing justifications, and solving problems with depth on a frequent basis. Further, when comparing responses on the fall 2016 survey to the spring 2017 follow-up survey, there were statistically significant increases in these behaviors, indicating the Network’s increasingly positive impacts on students over time. The Network has expanded high school students’ opportunities to engage in deep, student-centered math learning, and the Network is scaling success as it expands in size and in the diversity of participating schools and students.