Editors’ Note: In this third post in our series on networked improvement community (NIC) initiation, we spotlight issues related to leadership, organization, and operations that support the successful launch of networked improvement work. This focus corresponds with the fourth domain of effort in our NIC Initiation Framework. In order to enliven this discussion, we asked leaders from the Mathematics Teacher Education Partnership to reflect on their experience initiating a NIC.

The Mathematics Teacher Education Partnership (MTE-Partnership) is a national consortium of over 100 universities and over 100 school systems. It was formed to address the undersupply of new secondary mathematics teachers who are well prepared to help their students attain the goals of the Common Core State Standards for Mathematics.

It was organized under the Association of the Public and Land-Grant Universities (APLU), which was able to mobilize leaders of higher education institutions to collective action on this challenge. Early on, the Partnership leadership team faced a critical decision on its organization, given its desire to fully engage its large number of university-based teams and maintain a focus on disciplined efforts to develop and test needed improvements, rather than the more typical ad hoc solution generation.

After soliciting input from its partner members, the  MTE-Partnership decided to organize as a networked improvement community (NIC) model developed by the Carnegie Foundation for the Advancement of Teaching, and specifically guided by the Network Initiation Framework described in the first post in this series. Given the complexity of MTE-Partnership’s network structure with very large numbers of members, the fourth domain of the initiation framework – network leadership, organization, and operation – is particularly salient for our work. In this blog, we describe our experience launching a NIC with a particular focus on key aspects of leadership, organization, and operation.

NICs are typically voluntary associations among educational professionals committed to working on a common problem of practice. Consequently, it is important that initiation teams take concrete actions to recruit and select members in a way that will engender commitment to joint improvement work. For example, it is important that members see themselves and their passions represented in the work of the NIC. In the case of the MTE-Partnership, we were working with scores of universities and school districts on a broadly defined problem of practice. Our task as leaders of the initiation team was to develop a complex network structure that enabled teams to identify with different aspects of the secondary mathematics teacher preparation problem while still engaging in effective collective and complementary work. One of the benefits of NICs and other networks is that they can facilitate parsing a large and complex problem into actionable pieces to which individual members can contribute. But this same benefit creates management challenges as a leadership team aims to make sure that everyone’s work is moving in the same direction.

Networks can facilitate parsing a large and complex problem into actionable pieces.Twitter

Our solution to this challenge was to create five Research Action Clusters (RACs), each of which focuses on one of the highest priority areas (or drivers) determined most likely to contribute to our network’s aim. As an explicit part of our design, each RAC includes the involvement of mathematicians, mathematics educators, and K-12 personnel — all of which come from organizations that commit to the NIC. The RACs, represented in figure 1, specify discrete components of the teacher preparation challenge – such as developing models for effective clinical experiences – that teams can rally around and get members involved in improvement work. But they also bound the scope of the work that teams engage in so that they relate to key areas that the network has determined will contribute to our network aim. Consequently, the RACs add a layer of organizational structure to channel the work of network members in ways that are tied to the primary drivers in our driver diagram, which specifies our NIC’s theory of improvement. 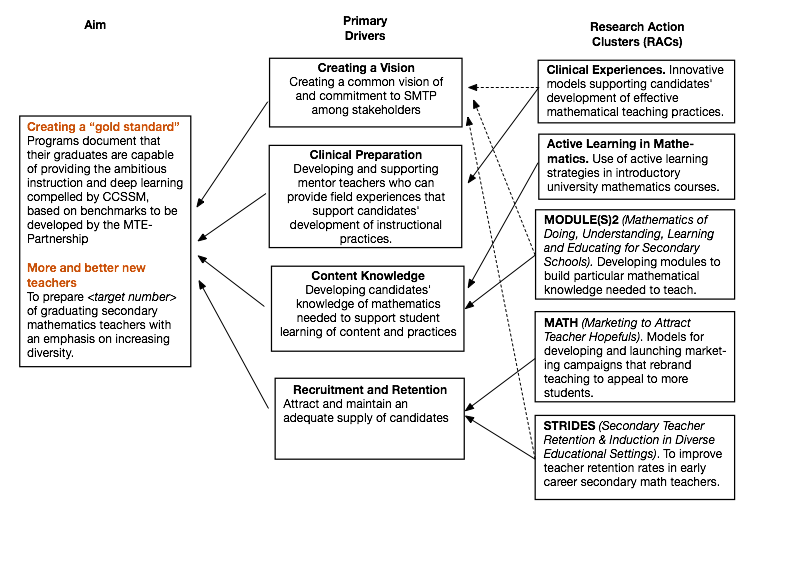 The RACs have been the primary structure for participation in the NIC. A three-day residential “boot camp” was held early in the NIC’s development to launch the RACs. This convening provided representatives of partnership teams the opportunity to learn more about improvement science and NICs, and to begin to organize the RACs. At the convening, each RAC developed a driver diagram, identified measures to track progress, and drafted an initial action plan. Additionally, each RAC designated a chair or co-chairs to coordinate the work, allowing them to proceed with improvement work semi-independently.

Annual convenings provide a look at how their work fits with the broader mission of the NIC.Twitter

The Clinical Experiences RAC, for example, has sought to contribute to the development of more and better secondary mathematics teachers by focusing on the experiences that teaching candidates have in their practica and internships. Challenges include an inadequate supply of quality mentor teachers to oversee the experiences and the need to strengthen the relationship between teacher preparation programs and school partners in which clinical experiences take place so they share a common vision of teaching and learning. The RAC has worked on multiple components of the problem. For instance, a group of teams is developing and testing a model for placing teaching interns in school-based clinical experiences in pairs, facilitating tighter connections between teacher preparation programs and schools. One team piloted a model for pair placement and reported findings to other teams. Now other teams are testing the model and adapting it to work within their specific contexts.

The MTE-Partnership leadership team, composed of representatives from each RAC, has used the RAC structure to coordinate the work of our large and ambitious NIC. The structure has provided a way to engender collective action among constituents (e.g., university faculty) who typically operate with high degrees of autonomy and independence. However, the structure has created some competition between building participant identification with the overall network and the individual RACs in which they participate. In some cases, participants have noted in conference evaluations that they value time to work with their RAC over sessions addressing more general partnership activities. This is not surprising given that each RAC has a distinctive agenda which has great appeal to the individuals engaged in the work, and it is within the RACs that most of the improvement work gets done.

We can achieve more by harnessing the distributed, yet coordinated efforts.Twitter

In order to address this competition, the leadership team continually balances time and attention at annual conferences and other convenings between plenary sessions providing overall updates and vision for the NIC, with time spent in breakout sessions for work by individual RACs. Time is spent at each convening retracing history, goals, and vision for the overall group in order to provide the broader context for the work by the RACs. In addition, the RACs share their progress, providing an opportunity for cross-RAC learning and setting the stage for engaging additional members in the work of the RACs. The leadership team is committed to these actions in order to foster a sense of common purpose and identity, issues described in Domain 5 of the Network Initiation Framework (i.e., that concerning Culture, Norms, and Identity). We think it is essential to the sustainability of our NIC and the accomplishment of our overall improvement aim that members identify as members of the MTE-Partnership in addition to their RAC. The power of the NIC model is that we can achieve more by harnessing the distributed, yet coordinated efforts of many teams working on a common problem. 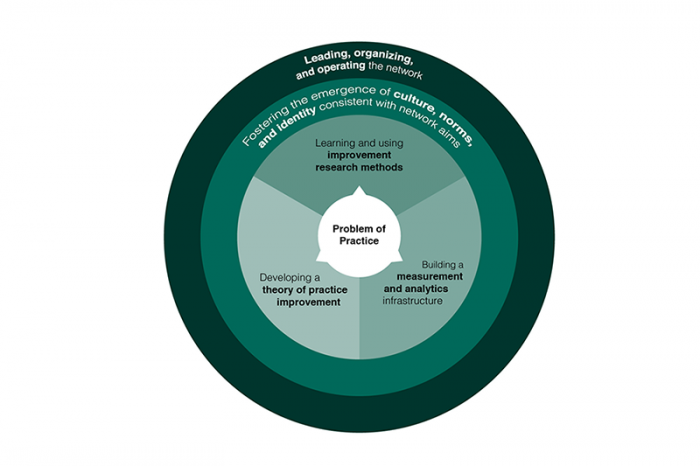 How to Launch a Productive Network

In the first post of our network initiation series, we outline the networked improvement community initiation framework, exploring each of the 5 domains. 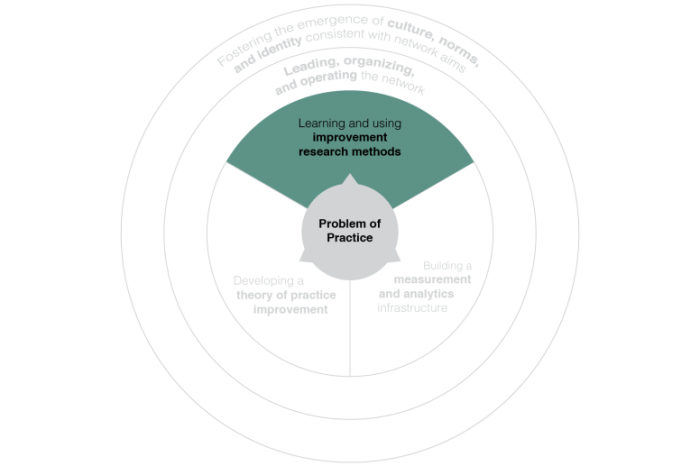 This second post in our series about networked improvement community initiation focused on how to build capacity of network members to use improvement science to learn from practice.